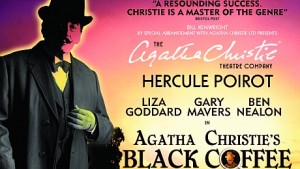 A quintessential English country estate is thrown into chaos following the murder of eccentric inventor Sir Claud Amory, and the theft of his new earth shattering formula.

Arriving at the Estatemoments too late, one man immediately senses a potent brew of despair, treachery, and deception amid the estate’s occupants. That man is Hercule Poirot.

In the first play ever written by Agatha Christie we are introduced to a character who went onto become the most famous detective of all time and the only fictional character ever to receive a full-page obituary in the New York Times.

This new production of Agatha Christie’s Black Coffee includes Company regulars: Liza Goddard, star of such TV hits as Bergerac and the long-running Give Us A Clue, Gary Mavers who is best known for playing heart-throb doctor Andrew Attwood in Peak Practice and Ben Nealon, perhaps best loved for his role as Capt Forsythe in the ITV drama Soldier Soldier.

Malcolm Singer will have his review on these pages very soon. Just click on “Theatre Reviews” (above) if you would like to read what Malcolm thought of this production.