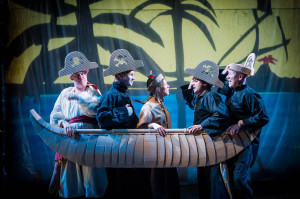 A new opera for children and families, The Firework-Maker’s Daughter, by award-winning British-American composer David Bruce and librettist Glyn Maxwell, based on the novel of the same title by children’s author Philip Pullman (His Dark Materials), the new two-hour opera is produced by The Opera Group and Opera North, in association with the Royal Opera House and Watford Palace Theatre.

This vivid, adventurous re-telling will be directed by John Fulljames, Associate Director of Opera at the Royal Opera House, and performed by a cast of five singers and two puppeteers. Set in the Far East, the production tells the story of Lila, a young girl who wants to be a firework-maker, like her father.  The opera uses a mixture of puppetry and live projection to create magical effects inspired by Indonesia’s shadow puppetry tradition.

David Bruce’s fun and lyrical score draws inspiration from folk and classical traditions from around the globe to create a unique sound world. It will be performed by a chamber orchestra of nine players, from CHROMA, an ensemble well known for their performances of contemporary work. A cast of top opera singers includes soprano Mary Bevan as Lila and counter-tenor James Laing as Hamlet, the elephant.

THE FIREWORK-MAKER’S DAUGHTER, at the Oxford Playhouse on 28th & 29th May