In 1886 the Director of the Imperial Theatres in Russia, Ivan Vsevolozhsky commissioned  Pyotr Tchaikovsky to write the music for the ballet of Sleeping Beauty. The French choreographer Marius Petipa finally gave Tchaikovsky his anticipated requirements in January 1889 and by that May the music was sketched out and the orchestrations completed two months later. The premier of the ballet was on January 15th 1890 and soon became a firm favourite with the public. 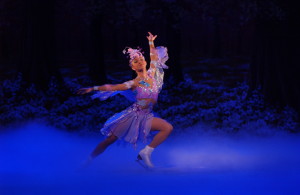 The Imperial Ice Stars are taken from the cream of Russian skating talent and perform this magical version of Sleeping Beauty perfectly and even manage – whilst still pleasing fans of the original ballet – to include stunning skating feats usually reserved for Olympic arenas!

Quite why some people look down their noses a little when a show on ice is mentioned I can’t imagine. We were treated to a spectacular ballet with the added attraction of expert skating, flying, wonderful sets and costumes (Sets designed by the creator of The Sydney Olympic Games opening Ceremony 2000 and costumes designed and made by Moscow’s famous Stanislavsky Theatre) and even fire – yes, at one point actual flames were seen to be leaping from the ice! 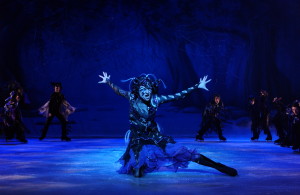 It’s difficult to single anyone out, with fine performances from the chorus members to the lead players – although I have to say that the evil Carabosse would probably take my vote!

If you have an evening left this week I urge you to get along to the Milton Keynes Theatre to see this magical evening of spectacular theatre. The Imperial Ice Stars boast that ” Lovers of Spectacular shows, musicals, ballet and sport will be enthralled” ….. and we most certainly were!