The brand new face of London Heathrow Sky Team’s Terminal 4 Pam Ann is touching down at The Alban Arena on Tuesday 5 & Wednesday 6 March at 8pm. 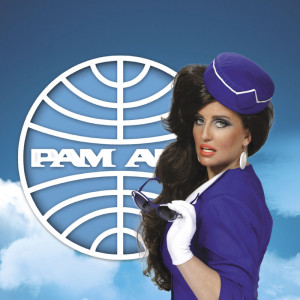 Direct from sell-out tours in Europe, USA and Australia, Pam Ann takes passengers on a raucous journey from security check-in, to boarding, to hopefully, landing. Fasten your seatbelts, stow your designer hand luggage and prepare to be flown like you’ve never been flown before.

Glamorous, hilarious and outrageous Pucci-clad Melbourne born Pam Ann is the alter-ego of Australian comedienne, creator, writer and producer Caroline Reid whose portrayal of the gutsy curvaceous air-hostess is unique in the world of comedy.

Her style leans towards camp humour, in the vein of Dame Edna Everage, Kathy Griffin and Chelsea Handler. The character of Pam Ann has developed a cult-like following and fans. Pam has toured with Cher, crewed private jets for Elton John and even Madonna is a huge fan.

Pam Ann is at the Alban Arena on 5th & 6th March