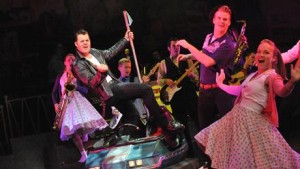 Mark Wynter – fresh from his celebrated run in the show at London’s Wyndham’s Theatre last winter – is set to perform classic hits Venus In Blue Jeans, Go Away Little Girl and It’s Almost Tomorrow for the first time on tour in 50 years.

Mark is delighted to be returning to his musical roots by joining the cast of Dreamboats and Petticoats on tour, revisiting the magical time in the early 60’s when he made his professional debut. Mark was hardly out of the charts from August 1960 until the end of 1963, during which time he had nine singles chart hits and spent an extraordinary 80 weeks in the hit parade.

At the request of his fan and friend Bill Kenwright, Mark will join the cast of Britain’s favourite rock ‘n roll musical Dreamboats and Petticoats – this time playing the father of a wannabe pop star.

However, every night for the finale of the show he will become Mark Wynter, and for the first time in five decades sing all of his hits!

In 1961 emotions run high as young musicians Norman and Bobby compete to win a national song writing competition, and, more importantly, the attentions of the gorgeous Sue. But when Bobby discovers that shy Laura is no slouch on the piano, love, and rock ‘n’ roll fame beckon.

Written by Laurence Marks and Maurice Gran, the team behind Goodnight Sweetheart, Birds of a Feather, The New Statesman, Shine on Harvey Moon and of course, Dreamboats and Petticoat’s sequel, Save the Last Dance For Me. You’ll find a fascinating interview with Marks & Gran on “Judi Herman Interviews” (Click on that page at the top of this one)

Featuring the classic tracks Let’s Dance, To Know Him Is To Love Him, Shaking All Over, Bobby’s Girl, Little Town Flirt, Only Sixteen, Runaround Sue, Happy Birthday Sweet 16, Let It Be Me, Let’s Twist Again, and many more from music’s golden era.