THIS SHOW IS NOW CLOSED.

It’s good that Milton Keynes has a choice of panto’s this year since 1702 Productions have brought Peter Pan to the Chrysalis Theatre for this Christmas season. It’s been made purposely more affordable for families to come and enjoy this romp through (or close to) JM Barrie’s wonderful story of the boy who never grows up. Seasonal pantomime gags are added to a script written by Steven Gordon-Wilson which uses songs well known to the young audience from shows as far apart as Annie and Hairspray. 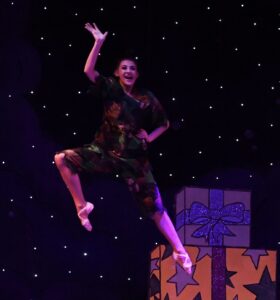 Lucy-Rose Rollason in the title role brings plenty of gusto to the part. She is from a thoroughly theatrical family (her brother Tommy J is currently in panto just down the road in nearby Dunstable). She flew across the stage as expected and managed to look comfortable in the process! 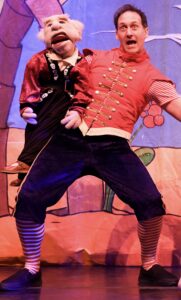 Leading the comedy was ventriloquist Steve Hewlett with his sidekick Arthur Lager as Mr Smee & Grandad Smee respectively. With or without the puppet, Steve’s experience and considerable comedic talent helped keep up the pace of the show.

Captain Hook was played by that EggHead CJ de Mooi. He was rather more snide than evil, though had there been a little more volume on his mic I think he would have sounded more powerful and the youngsters would be properly scared! He quite obviously revelled in playing this famous baddie and even managed to keep the audience glued through a song that almost went on as far as the third star on the right. (Maybe the director’s axe could descend cutting a few verses from some of the songs to bring the show down to 2hours including interval) 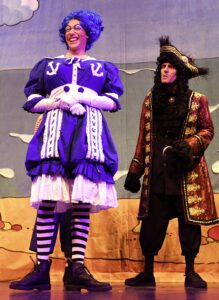 I think 1702 Productions have made a real find in Luke Byford as Mrs Smee. I’ve always believed that a panto dame needs to be at least 45-50 years old and slightly rotund but I’m pleased to report that young Luke proved me wrong entirely! He was funny, loads of energy, grabbed every opportunity to react to audience members and was always good fun and in character. He reminded me at times of Old Mother Riley and I can see him back next year as Widow Twanky or Dame Trott!

Children’s entertainer Kev Stevens as Starky could have been given more to do, I’m sure another trick or two here and there would’ve pleased the young members of the audience. Although they did wheel on the BooBox (whatever that is) but didn’t seem to actually get round to showing us what that was all about.

Other cast members included the children of course Wendy (Cara Bo), John (Alyssa Denehan) & Michael (Harvey Smith). Tiger Lily was played with some panache by local performer Lillia Grace who, on the night we were there, coped very well with her scenes downstage in the dark!

Eveey Ruth and her dog Pasha (playing the crew’s dog Fish) and the outrageous Jono Andrews did well considering they were rarely involved with the plot.

The older dancers from Rollason Stage School performed beautifully – as did the younger dancers, if only they’d appeared to be enjoying themselves. I think a couple more performances and they’ll know where they should be on each entrance.

Old favourite Mr Blobby makes several appearances, knocks the set and half the cast over and says “Blobby, Blobby Blobby” a lot! ….What more can I say?

The night we went to see the show was about the 4th performance and unfortunately for the cast and crew it suffered a few technical problems with lighting (or lack of it) and sound ( or lack of it), but I’m sure that will be sorted by now. So if you’re looking for a fun evening full of panto gags and that Peter Pan magic that won’t cost you the earth, then Peter Pan at the Chrysalis Theatre in MK is your best bet!

Peter Pan is at The Chrysalis Theatre, Milton Keynes until 2nd January