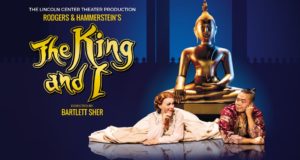 Rodgers and Hammerstein’s The King and I

Set in a glittering palace where everyone dresses in ravishing costumes, it’s the most visually splendid of Rodgers and Hammerstein musicals, and teems with a small army of the king’s children, wives and servants.

In the spectacular show‐within‐a‐show in the second half, the king commands Anna to stage a version of Uncle Tom’s Cabin to impress visiting diplomats with Siam’s project to modernise, this is a wonderful dazzling spectacle, courtesy of set designer Michael Yeargan, costume designer Catherine Zuber and choreographer Christopher Gattelli.

Not only did this critically acclaimed Broadway hit have a record breaking season in New York, it comes to Milton Keynes Theatre from a sell-out run at the London Palladium.
With almost more great songs than the King of Siam has wives (and he’s tied the knot many times over) Bartlett Sher’s interpretation of Rodgers’ & Hammerstein’s Tony Award-winning classic from the golden age of musicals is a triumphant revival.
Set in Bangkok in the 1860s, Anna Leonowens, a widowed British schoolteacher, has been hired to educate the children of the King of Siam.

Anna is sweet-natured but spirited and, though their relationship can be unconventional and tempestuous, it is not long before she wins the heart and mind of her employer. But, as a moderniser in an imperialistic world, he is struggling with his own principles and ideology. Performing as Anna, fresh from her West End success, is Annalene Beechey and reprising his critically acclaimed USA national tour performance as The King, Darren Lee.

The King and I features a company of more than 50 world‐class performers, including Ethan Le Phong and Paulina Yeung in the roles of the young lovers, with a full scale orchestra keeping them company by playing one of the finest scores ever written – including songs such as I Whistle a Happy Tune, Getting to Know You, Hello Young Lovers, Something Wonderful and Shall We Dance.

If I said this was the finest show I’ve seen this year, you might say “but it’s only February!” so let me say that without a doubt this is most definitely in the top three of all the shows I’ve sen in the last twelve months! The cast list alone took my breath away with its full orchestra and the enjoyment 50 top performers can bring – and they most certainly did!

To sit and enjoy the orchestra, under the direction of Malcolm Forbes-Peckham, play the overture not only sets the mood, but assures us that we are in for something really special. As the curtain rises we see Anna (Annalene Beechey) arriving with her son to take up the post of governess to the children of the King of Siam. The boat is life size and glides into dock through the mist. What an opening!

The sets (designed by Michael Yearn) throughout the show are not only spectacular but exactly right for telling this story.

But its the casting without a doubt that made this such a wonderful theatrical event. Annalene Beechey is the perfect Anna, having played the role at the London Palladium. Anna has grit and determination and a considerable sense of humour and I get the strong impression that Annalene has too! She is onstage virtually throughout and each song she sings  makes the packed house warm to her just that bit more! This performance deserves  awards!

The King of Siam, played brilliantly by Darren Lee is the perfect foil for Anna. Darren has that knack of being the King that you truly believe in but there is always a twinkle in his eye making the very most of all the comedy.

Mentioning any member of cast seems unfair as they were without doubt a fine team, but “Something Wonderful” beautifully sung by Cezarah Bonner as Lady Thiang was a highlight for me – as was “We Kiss In A Shadow” sung by Ethan Lee Phong & Jessica Gomes-ng as Lun Tha & Tuptim

The songs we know, the story we know, in fact if I’m honest I was expecting a slightly dated production – how completely wrong I was!  If you can get tickets, I implore you to make sure you see this show before it is too late – you’ll thank me afterwards. If I did a star system (which I don’t) I wouldn’t have enough for this production! Congratulations to the entire and very large team!