Pricilla Queen of the Desert at The Milton Keynes Theatre 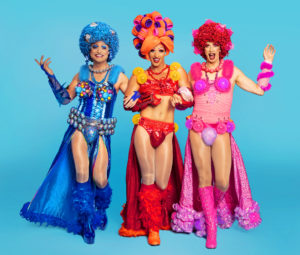 Pricilla Queen of the Desert is still packing them in after 25 years! The Milton Keynes Theatre was crammed to the rafters for opening night on Monday! I guess many had not seen the show before because for us old diehards that had seen it several times this production left us wanting. The cast were great and every one of them gave us 110% – I particularly liked Miles Western as Bernadette, the older one of the leading trio. Joe McFadden playing the lead I thought was more likeable and gained our sympathy more than in other recent touring versions. So what was it that jarred? The orchestra under the direction of Sean Green was great so that just leaves the direction or the sets or the costumes. Well, the sets were disappointing, where was the sharp intake of breath when we first saw the pink bus? The penultimate scene looked as though our fabulous trio were peeping over the wall of some sort of drab stockade. The costumes were unglamorous, not sexy and looked uncomfortable. The MacArthur Park costumes looked about as easy to manage as a Pudsey Bear or even Mr Blobby costume and the boys finale costumes were about as unsexy as you could get.

Such a shame for the talented cast with a score of thirty or so top, top tunes.
Bear in mind that I must be wrong because at the end the audience stood and cheered and danced and called for more – how could that many people all disagree with me??