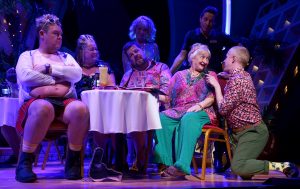 ITV’s award-winning comedy celebrates over a decade of all-inclusive hilarity, having followed the ensemble cast of holiday makers and staff for ten series since it first broadcast in 2007. Litten has now written an all new set of Alicante escapades for the much-loved cast members as they swap sangria for the stage – after a quick spruce up at the Blow ‘n’ Go!

A dose of Benidorm sunshine with your favourite stars from the Solana live on stage for the very first time.

Benidorm is at Milton Keynes Theatre until 20th October.

I hadn’t a clue how the popular television series would transform onto the stage, but I needn’t have doubted it. With a packed theatre bursting with Benidorm fans, a set that worked well as the reception, poolside, bar and function room of the Solana Hotel! This with the added attraction of the same stars that appear in the TV series recreating their roles, the show was great fun from beginning to end. Good idea to have a 12+ rating as some of the material is not offensive, but certainly adult.

Ibsen this aint, but if you like Benidorm the series then you’ll love this! You’ll be lucky to get a seat though!

Benidorm is at Milton Keynes Theatre until 20th October.