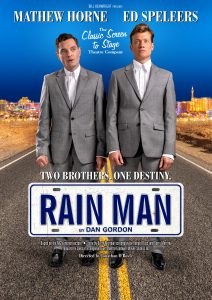 Rain Man is at The Cambridge Arts Theatre from 8th – 13th October.

Based on the MGM motion picture · Story by Barry Morrow · Screenplay by Ronald Bass and Barry Morrow · Produced by special arrangement with Metro-Goldwyn-Mayer Studios Inc.

When self-centered salesman Charlie Babbitt discovers that his long-lost brother Raymond, an autistic savant with a genius for numbers, has inherited the family fortune; he sets out to get ‘his half’. 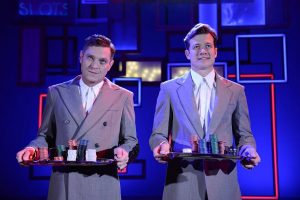 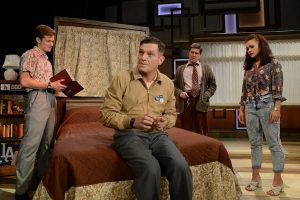 I was lucky enough to see this production a little earlier in this tour, these were my thoughts….

When I saw the Bill Kenwright production of Cilla I thought it was his finest work so far – Rain Man is most certainly its equal. It is a beautifully told story, thanks to the book by Dan Gordon and Jonathan O’Boyle’s direction. A fairly basic set which transforms seamlessly from office to bedroom to casino never detracts from the actors.

The very strong cast lead by Mathew Horne and Ed Speleers keep the audience entranced and completely immersed in the story. Although he’s done plenty of acting for the screen I was very surprised to learn that this is Ed Speleers’ stage debut! He gave such a strong performance – the perfect foil and complete contrast to Mathew Horne’s wonderful portrayal of Raymond, the adult autistic brother that has spent most of his life in an institution. I took with me a friend who teaches young adults with various forms of autism and he assured me that Mathew had obviously done his research as his performance was completely accurate.

I urge you to get to see this amazing piece of work, try as I might I couldn’t pick fault with the tiniest thing. Congratulations to a superb effort from The Classic Stage to Screen Theatre Company and this particular cast and crew.