Claire Sweeney takes on the role of ‘Irene’, Tom Chambers plays ‘Bobby’ and Charlotte Wakefield  ‘Polly’ in the national tour of the Watermill Theatre’s production of CRAZY FOR YOU, at Milton Keynes Theatre, until Sat 24 March. 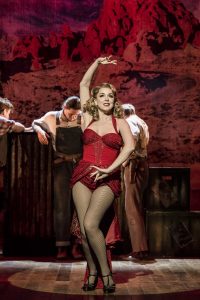 Claire Sweeney has a television and theatre career which spans over 20 years. She is probably best known for playing the role of Lindsey Corkhill in Brookside. Other television credits include Clocking Off and Merseybeat along with a presenting role on 60 Minute Makeover and a panellist on ITV’s Loose Women. Claire’s West End roles include Roxie Hart in Chicago and Miss Adelaide in Guys and Dolls. Claire previously played the title role in Educating Rita at London’s Menier Chocolate Factory and prior to that, played Paulette in the UK tour of the award winning Legally Blonde. She most recently appeared as Baroness Bomburst in the National Tour of Chitty Chitty Bang Bang.

Tom Chambers created the role of Jerry Travers in the West End musical Top Hat, for which he was nominated for an Olivier Award for Best Actor in a Musical. In 2008 he won the 6th season of Strictly Come Dancing. He can currently be seen in the hit BBC drama Casualty. His recent stage credits include Private Lives and White Christmas in the West End. 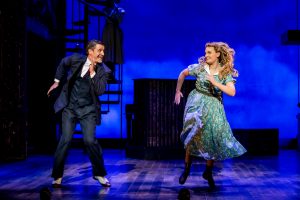 Crazy For You UK Tour
Photo Credit : The Other Richard

Charlotte Wakefield made her West End debut as Wendla in Spring Awakening, for which she was nominated for an Olivier Award. She played Maria in the critically acclaimed production of The Sound of Music at Regent’s Park Open Air Theatre receiving nominations for Best Actress in a Musical at both the Evening Standard and Olivier Awards.

High energy, high kicking and gloriously glamorous, CRAZY FOR YOU is the ultimate feel-good musical with a fabulous score from the Gershwin brothers’ songbook. Mistaken identities, plot twists, heartbreak, happiness and a wealth of memorable tunes, including I Got Rhythm, They Can’t Take That Away From Me, Nice Work If You Can Get It and Embraceable You, all feature in this celebration of the great Broadway musicals.

I went along to see the show, these are my thoughts:

With a fine looking set of the dilapidated theatre, and some very fine musicians/actors/singers/dancers – yes they had all those skills, a quadruple threat! = we were all set for a fantastic musical,

So where on earth did it go wrong? Well, with gags seemingly added willy-nilly presumably borrowed from the local pantomime (“You’re one step away from an idiot” etc) some very laboured comedy routines, especially early in act two with the two Bela Zanglers routine with its very careful moves going on forever, not to our leading man mention getting down from the balcony with a bucket which Norman Wisdom would’ve made hilarious. As the show opened originally in October 1930 I was surprised to hear “simples” and “health & safety” as throw away gags.

Claire Sweeney’s one song “Naughty Baby” could have had the  seductiveness of Marilyn Munro or even played for comedy, it floundered somewhere in between. I thought Tom Chambers in this was miscast, he’s not exactly another Tommy Tune or Tim Flavin! Tap dancing is hard work, but the masters manage to make it look easy, Tom’s efforts looked mechanical and exhausting, the lounge suit he spent a lot of time in didn’t help flapping all over the place. The last straw for me was when Bobby came through the fourth wall and handed his bottle of beer to and audience member to look after, purely to set up the gag that the man had apparently drunk the contents of the bottle!  I haven’t felt quite like that since Za Za in the recent tour of La Cage Aux Folles stopped the show to go into a panto routine with the audience!

Most of the supporting cast were terrific, some of them playing several instruments and still managing to stay in character, special mention I think to Ned Rudkins-Stow great musician with a fine voice who I’d not seen before, but my guess is that we’ll all see quite a bit more of this young man. The same goes for Seren Sandham-Davis playing Dim but adorable Patsy.

You might have guessed by now that I was not Crazy for this production of Crazy For You – sorry, George & Ira!