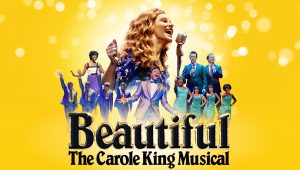 BEAUTIFUL – THE CAROLE KING MUSICAL received its Broadway premiere in January 2014 at the Stephen Sondheim Theatre where it continues to play to packed houses and throughout 2015/2016 it toured the US. The London production ended its triumphant two and a half year run at the Aldwych in August. 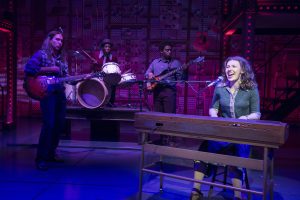 BEAUTIFUL – THE CAROLE KING MUSICAL has a book by Douglas McGrath with words and music by Gerry Goffin, Carole King, Barry Mann and Cynthia Weil.  The show tells the inspiring true story of King’s remarkable rise to stardom, from being part of a hit songwriting team with her husband Gerry Goffin, to her relationship with fellow writers and best friends Cynthia Weil and Barry Mann, to becoming one of the most successful solo acts in popular music history.

Along the way, she wrote the soundtrack to a generation, including one of the best-selling albums of all time, Tapestry, and countless classics such as (You Make Me Feel Like) A Natural Woman, Take Good Care of My Baby, You’ve Got a Friend, So Far Away, It Might as Well Rain Until September, Up on the Roof and The Locomotion. The show also includes the Cynthia Weil and Barry Mann hit songs You’ve Lost that Lovin Feeling, On Broadway and We Gotta Get out of This Place.

Bronté Barbé plays Carole King, she was a finalist in Andrew Lloyd Webber’s BBC1 television series “Over The Rainbow” in 2010. Since then she has appeared on stage in both London’s West End and around the UK. Previous credits include “Cool Rider” in the West End and ‘Princess Fiona’ in the UK Tour of “Shrek -The Musical”. She most recently starred in “The Wild Party” at The Other Palace. 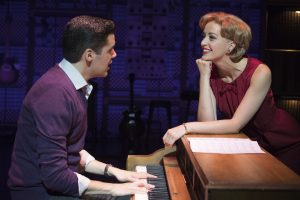 Kane Oliver Parry (playing Gerry Goffin) has starred in “Carousel” and “Sweeney Todd” at London’s Coliseum. West End credits include “Wicked” and “Urinetown”, “The Light Princess” at the National Theatre and the International Arena Tour of “We Will Rock You”. 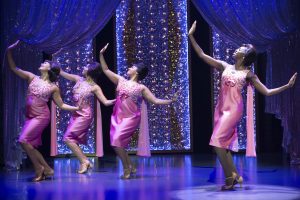 BEAUTIFUL – THE CAROLE KING MUSICAL, is at  Milton Keynes Theatre until Saturday 24 February.

Jhez Bermudez went along to see the show in Milton Keynes and these are his thoughts:

I was not sure what to expect when I went along to see Beautiful – The Carole King Musical, but I needn’t have worried – it does what it says on the tin! It is beautiful! With a strong story, a stellar cast lead by a stunningly good performance by Bronte Barbe, fabulous music with a very good live orchestra lead by Patrick Hurley, strong acting against some brilliant sets designed by  Derek McLane what was there not to like?

Apart from being a very good true story that was approved by the great lady herself, Beautiful brings home to you just what a prolific songwriter Carole King has been. Her first professional recording when she was sixteen, the names of other singers that have recorded her songs reads like a who’s who of the International music industry. As for Carole’s own recordings, although her album Tapestry usually springs to mind, this show reminds us that quite apart from writing for others, she has recorded no less than 25 studio albums.

All these facts and figures would mean nothing if the show itself weren’t presented with such panache and slick professionalism. Whether you prefer Celine Dion to Mariah Carey or Aretha Franklin to James Taylor there is something for you in this show – and if you’re very lucky you might – just might – get a ticket!  Thoroughly recommended!