Customers are going to be spoiled for choice at Royal & Derngate at the end of March, with two great weeklong shows! In the Derngate auditorium  Sister Act – the sensational feel-good musical directed by Craig Revel Horwood and starring Alexandra Burke. 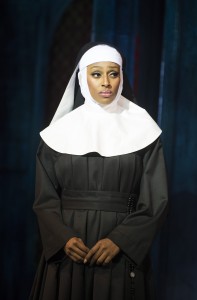 Based on the smash hit movie starring Whoopi Goldberg and Maggie Smith, Sister Act tells the hilarious story of Deloris Van Cartier (Played by Alexandre Burke), a disco diva whose life takes a surprising turn when she witnesses a murder. Under protective custody she is hidden in the one place she won’t be found – a convent!

Sister Act is at The Derngate, Northampton from 27th March until 1st April.

At the same time, the Classic Thriller Company will be in the Royal auditorium is a new stage thriller from the queen of psychological crime Ruth Rendell. Widely considered to be one of Rendell’s greatest works, A Judgement in Stone is loved for its brilliant rendering of character, plot and motive, and is undoubtedly Rendell at her thrilling best.

A Judgement in Stone is at The Royal, Northampton from 27th March until 1st April.