Simon Beaufoy’s The Full Monty, which won the UK Theatre Award for Best Touring Production, is at Milton Keynes Theatre from 3rd–8th October.

The cast is led by Gary Lucy (Danny Pennant in EastEnders, DS Will Fletcher in The Bill, Kyle Pascoe in Footballer’s Wives, Luke Morgan in Hollyoaks, winner of Dancing on Ice) as Gaz, along with Andrew Dunn (best known as Tony in Dinnerladies and for his regular appearances playing Alastair Campbell on Bremner, Bird and Fortune) as Gerald, Louis Emerick (Mick Johnson in Brookside and PC Walsh in Last of the Summer Wine) as Horse, Chris Fountain (best known for his roles as Justin Burton in Hollyoaks and Tommy Duckworth in Coronation Street, runner-up of Dancing on Ice) as Guy, Anthony Lewis (Marc Reynolds in Emmerdale, Casualty) and Kai Owen (best known for his portrayal of Rhys in Torchwood and recently played Pete in Hollyoaks) as Dave. 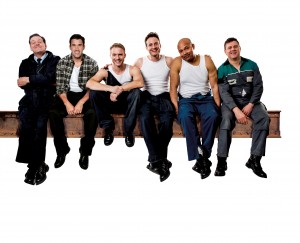 In 1997, a British film about six out-of-work Sheffield steelworkers with nothing to lose, took the world by storm becoming one of the most successful British films ever made. The story still resonates today, probably more so now than ever.

Simon Beaufoy, the Oscar- and BAFTA-winning writer of the film, has adapted his own screenplay for this hilarious and heartfelt stage production, which features the iconic songs from the film by Donna Summer, Hot Chocolate and Tom Jones.

The Full Monty is Simon Beaufoy’s first work for the theatre. His screen credits include The Hunger Games: Catching Fire, Salmon Fishing in Yemen, 127 Hours and Slumdog Millionaire, as well as The Full Monty.

The UK Tour of The Full Monty is directed by Jack Ryder. His directing credits include national tours of Calendar Girls and the short film Act of Memory with Claire Skinner, Owen Teale and Anna Massey, which was officially selected for nine international festivals around the world including the Cannes Film Festival. As an actor, Jack is probably best known as Jamie Mitchell in EastEnders, a role he played for four years.

Design is by Robert Jones, choreography by Ian West, lighting by Tim Lutkin and sound by Sarah Weltman, with casting by Marc Frankum.

The 2016/17 UK Tour of Simon Beaufoy’s The Full Monty, based on the Fox Searchlight Pictures motion picture, is presented by David Pugh & Dafydd Rogers and is a Sheffield Theatres production. 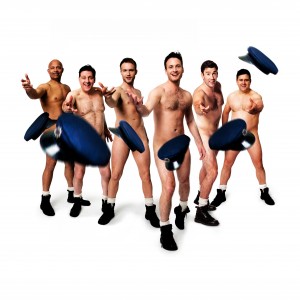 Unable to get to the theatre this time, these were my thoughts from the previous visit to MK of the same production of The Full Monty with a slightly different cast, but still with Gary Lucy playing Gaz….

David Pugh (producer of Equus starring Daniel Radcliffe told me at the opening night of The Full Monty at Milton Keynes Theatre, that it took him a while to persuade Simon Beaufoy, writer of the 1997 film to adapt the story for the stage. Thank goodness he persevered!
Simon has been able to “flesh out” the characters a little and it pays off as we really get to see their various traits and hang-ups. The Full Monty is perfectly cast with popular actor Gary Lucy in the lead. The play brings us the poignancy, the difficult life in Sheffield during the 1980’s, and above all the humour of those men having to struggle to feed their families.
The night ended with a well deserved standing ovation from the packed MK Theatre. Get along to see it if you possibly can!

The Full Monty is at Milton Keynes Theatre from 3rd to 8th October.