Direct from the West End, Broadway and 25 countries around the globe comes ‘a joyous version of the Alfred Hitchcock classic’ (Sun Times) spy thriller, The 39 Steps, brilliantly and hilariously recreated as the smash hit Olivier Award Winning Best New Comedy. 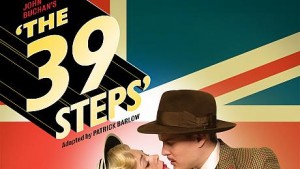 “Quite the funniest night I’ve had in the theatre – just the tonic we all need at the moment, the laughs come too thick and fast to count!” (Ernie Almond)