An authentic recreation of The Beatles comes to the area on 14th May when The Cavern Beatles return to The Core at Corby Cube with another extensive repertoire of hits and album tracks and a fully authentic representation of the Beatles music. 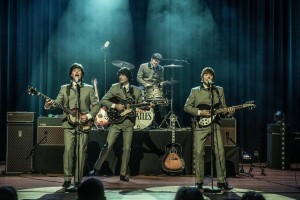 As ambassadors of the world famous Cavern Club, the band’s members are talented instrumentalists and singers, and hugely dedicated Beatles fans, intent on recreating their individual characters to an unprecedented standard.

Countless hours of study and rehearsal have gone into the show which emulates with uncanny detail and meticulous accuracy the rise of the greatest band in the world, from the days of the Cavern through to the rooftop concert in Savile Row, London in 1969.

The band’s breath-taking attention to detail extends to the use of genuine 1960’s instruments and all of the equipment seen on stage is the same as that used by the Beatles wherever possible. This has led to them becoming widely regarded as being as close to the real thing as they are ever likely to get.

The Cavern Beatles can be seen at The Core at Corby Cube on Saturday 14 May at 7.30pm.