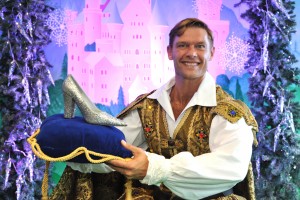 Actor, dancer, singer and television presenter John Partridge is heading the cast in Cinderella at Royal & Derngate Northampton this Christmas, from Friday 11 December 2015 to Sunday 3 January 2016. John will be joined by Sid Sloane from CBeebies, plus impressionist Danny Posthill and vocalist Alison Jiear, both fresh from their appearances on this year’s Britain’s Got Talent.

John is best-known, however, for his role as Christian Clarke in EastEnders. The role won John legions of fans as did his appearance on other television projects, such as his role as judge on Over the Rainbow in search of a leading lady for The Wizard of Oz in the West End, and most recently Tumble, a gymnastics reality show on BBC One.

Having lit up television screens and children’s faces across the country for 11 years on CBeebies, presenter Sid Sloane has subsequently toured the UK with his one-man production Sid’s Show where his biggest (yet smallest) fans had the opportunity to meet their favourite star. Sid has also worked for the BBC on voice-overs and radio dramas and still regularly appears on CBeebies on the much-loved show Let’s Play. Sid will be playing Dandini. 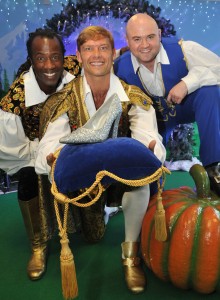 Playing Buttons will be star impressionist Danny Posthill. Danny started his career at the age of 16 and has gone on to perform all over the world, working around the Mediterranean and South America, plus summer seasons, cabaret dates and on the comedy circuit. Most recently Danny took part in Britain’s Got Talent, wowing judges and voting audiences alike in the final.

Also from the recent series of Britain’s Got Talent, and with a wealth of musical theatre experience, is Alison Jiear who will play the Fairy Godmother. Alison trained has performed across the globe and appeared in numerous West End musicals including On the Town at the English National Opera, Hot Mikado and Jerry Springer the Opera, for which she was nominated for the Laurence Olivier Award for Best Actress in a Musical.

Speaking about his role as Prince Charming, John Partridge said: “I absolutely love pantomime and I can’t wait to get started in rehearsals. The cast we’ve assembled are brilliant and it’s going to be a show that Northampton won’t want to miss.”

Cinderella features all of the traditional Northampton pantomime ingredients audiences have come to expect, plus Pegasus the amazing flying horse – all of which will ensure that audiences will have a ball!

Cinderella will be at the Royal & Derngate from 11th December until  3rd January.