The Shawshank Redemption: a prison drama that goes straight to the heart of the matter 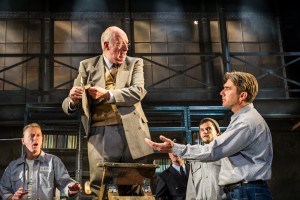 Despite protests of his innocence, Andy Dufresne is handed a double life sentence for the brutal murder of his wife and her lover.
Incarcerated at the notorious Shawshank facility, he quickly learns that no one can survive alone but Andy strikes up an unlikely friendship with the prison fixer Red, and things take a slight turn for the better.
However, when Warden Stammas decides to bully Andy into subservience and exploit his talents for accountancy, a desperate plan is quietly hatched…

Based on Stephen King’s 1982 novella Rita Hayworth and The Shawshank Redemption, this play, which is adapted by Owen O’Neill and Dave Johns and directed by David Esbjornson, examines desperation, injustice, friendship and hope behind the claustrophobic bars of a maximum security facility.

Two of TV’s best loved leading men, Ian Kelsey (Andy Dufresne) and Patrick Robinson (Red), star in this thrilling new production of The Shawshank Redemption.
On announcing the end of his role as Howard Bellamy in Doctors, there was immediate speculation as to what would be next for Ian, whose extraordinary TV career has hardly seen him off our screens in two decades with leading roles in Casualty, Emmerdale, Down To Earth and Where The Heart Is.
Patrick Robinson’s impressive TV career also spans two decades and includes eight years as ‘Ash’ in BBC’s Casualty, Midsomer Murders, and Strictly Come Dancing 2013 where he got to the semi-finals. His stage work has seen him play leading roles with the RSC and in London’s West End. 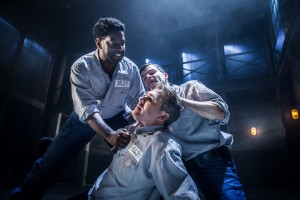 The cast also includes Ian Barritt as Brooksie, co-writer Owen O’Neill as the bible-thumping warden, Stammas, Leigh Jones as Rooster and Kevin Mathurin as Bogs Diamond and the show is a Bill Kenwright production.

The Shawshank Redemtion is at Milton Keynes Theatre until 21st November

This is a perfect night at the theatre if you like a play to get your teeth into and that will make you think! You could’ve heard a pin drop in the packed Milton Keynes Theatre for the full two hours, followed by a slight pause then terrific applause that just went on and on! Whether you’ve seen the film or not this fine cast will keep you on the edge of your seat!

I’m quite purposely not saying anything that might spoil the play for those intending to go to the MK Theatre this week, suffice to say that, relationships & bullying, all part of life in this American prison are all portrayed so realistically – with the final twist taking you by surprise!

If you don’t go to the theatre very often, make sure you go this week, you’d be a fool to miss this!