‘When someone gets murdered, you have to find out who did it...’ And that’s exactly what Christopher aims to do…. 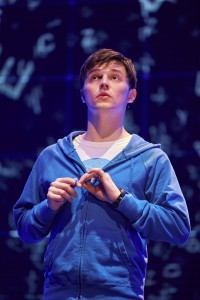 The Curious Incident of the Dog in the Night-Time won five Tony awards on Broadway and no less than seven 2013 Olivier awards; not surprisingly. It is an unforgettable piece of theatre that is powerful, funny and moving.

Based on the award-winning novel by Mark Haddon, adapted for the stage by Simon Stephens and directed by Marianne Elliott, this stunning National Theatre production makes a much-anticipated visit to Milton Keynes Theatre this week. 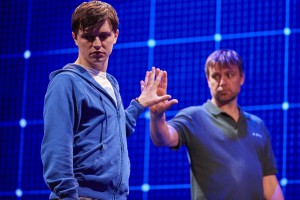 The set is designed by Bunny Christie with movement by Scott Graham and Steven Hoggett for Frantic Assembly.

Can you honestly imagine the world where no-one was capable of ever telling a lie? Christopher is a teenager with Asperger’s Syndrome and because of it cannot tell a lie and he assumes that everyone he meets is the same – until he discovers that his own parents have lied to him!

This breathtaking National Theatre production is as fine a piece of theatre as you will ever see.

It is stunning that this story, cleverly adapted from Mark Haddon’s novel by Simon Stephens and told by a truly talented cast, has made me understand more about autism than anything else ever has. Due to the wonderful direction by Marianne Elliot, movement direction by Scott Graham & Steven Hoggett, brilliant set design and special effects, we get to see and feel axactly what Christopher feels inside during (for instance) his first ever trip on his own from his home in sleepy Swindon to the hustle and bustle of London. I swear the entire audience felt his panic!

This production is an absolute “must see” so if you haven’t already got tickets, get on-line right now – and just hope you’re not too late! If I used a star system I’d run out of asterisks!