Aladdin and His Magical Lamp at The Sutton Coldfield Town Hall 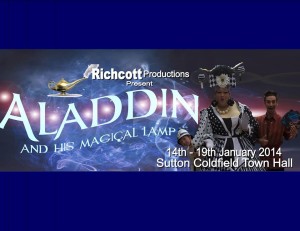 The good folk of Sutton Coldfield are in for a treat this week! Richcott Productions’ presentation of “Aladdin and his Magical Lamp” is full to overflowing with every pantomime treat you could ever wish for! With fabulous sets, corny gags fit for the most seasoned panto audience and some excellent dancing by Body Beat School of Dance who appeared in turn as citizens of Peking, cave spirits and even Abanaza’s slaves. Speaking of Abanaza, Nick Snowden’s portrayal of the villian was truly evil – if a little laid back and the children loved to hate him! 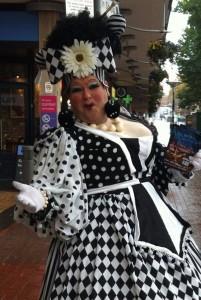 As Widow Twankey the show starred one of Britains very popular pantomime Dame Comedians Richard Aucott – fresh from playing Dame Trott in darkest Hertfordshire just before Christmas. Richard, as you might expect, comes complete with some outrageously fabulous costumes – and these were spectacular! A real favourite was the finale one with it’s pagoda hat trimmed with more ostrich plumes than you’ll see at Dudley Zoo! With some great songs, sweets to throw to the children, no shortage of one-liners to make the adults chuckle Sutton should be proud of its resident panto stalwart. 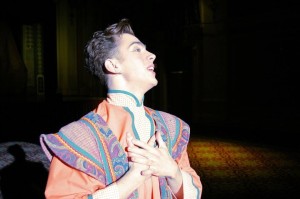 Alex Cardall was the surprise of the night! Quite obviously not a newcomer to the stage, (He’s appeared at The Birmingham Hippodrome several times and is the drummer for the Midland Youth Jazz Orchestra) Alex has the looks and the voice of a future star – and the personality to have audiences in the palm of his hand! I think we’ll be hearing a lot more about this young man. 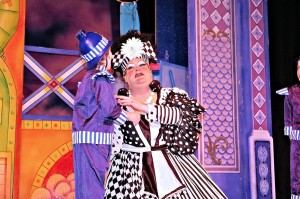 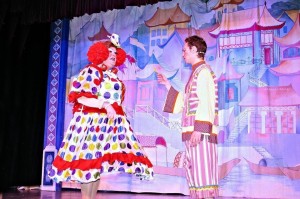 A lot of the comedy was in the hands of Andy James Michel playing the energetic Wishy Washy. He tore round the stage as if looking for somewhere to settle and chat to us! He managed to get the first night audience joining in and on his side for the rest of the show from his first few seconds onstage.

I saw the show on first night and although there were a few minor technical glitches, I’m sure these were sorted out overnight so that the audiences for the rest of the week will enjoy this well presented traditional pantomime. The finale set and matching costumes are breathtaking, you’ll see what I mean – if you are lucky enough to get a seat!

One thought on “2nd Panto for Widow Twankey!”