West End production of “Singin’ in the Rain” starring Maxwell Caulfield as RF Simpson with Vicky Binns as Lina Lamont as at Milton Keynes Theatre. 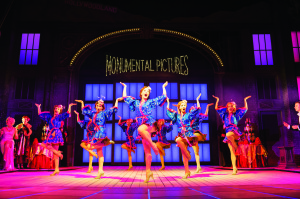 Maxwell Caulfield said “I am beyond thrilled to be hitting the road with Singin’ in the Rain.  As a huge fan of the original movie, the chance to bring this story to life on stage is something I couldn’t pass up and it’ll be great visiting some of the beautiful theatres on the tour, some I’ve been to previously, some are going to be a brand new experience for me.  Theatre work is a huge passion of mine and having dealt with a few studio bosses in my time too, I relish the opportunity to play RF Simpson this glorious production”. 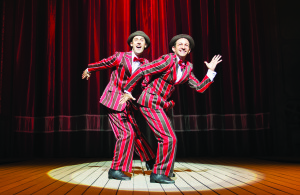 Vicky Binns said “To be in a musical of this scale and quality is a dream job for me. I was blown away when I saw this production in the London, so it’s a thrill to bring it straight from the West End to Milton Keynes. If like me, you have seen and love the film, it is a real treat to see how it can be brought so lavishly to the stage.  The part of Lina Lamont is a gift of a role as the writing is packed with humour, pathos and well…fabulousness!”. 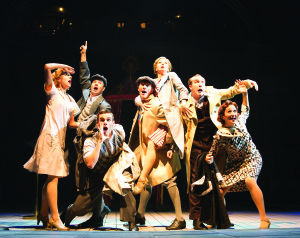 Don Lockwood is a silent movie star with everything he could want – fame, adulation and a well-publicised ‘romance’ with his co-star Lina Lamont.  But Hollywood is about to change forever.  There is rumour in the studio of a new kind of film, where the actors actually talk…and sing…and dance.  Can Don and the uniquely voiced Lina make the transition and will chorus girl Kathy Selden fulfil her dream of stardom and capture Don’s heart along the way?

Maxwell Caulfield is best known to TV audiences as Mark Wylde in ITV’s Emmerdale, Dr Jim Brodie in BBC1’s Casualty and Holby City and Miles Colby in both Dynasty and The Colbys. His theatre credits include Billy Flynn in Chicago in both the West End and on Broadway, An Inspector Calls at the National Theatre and The Rocky Horror Show on UK tour.

This production of Singin’ in The Rain opened at the Chichester Festival Theatre in summer 2011 and its run was extended due to unprecedented public demand.  It transferred to the iconic Palace Theatre in the West End in February 2012 where it received huge critical acclaim – and four Olivier Award nominations! 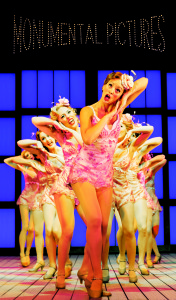 Singin’ In The Rain features songs by Nacio Herb Brown and Arthur Freed, including Make ‘em Laugh, Good Morning, Moses Supposes and Singin’ in the Rain.  The show uses half a mile of flexible pipe work, a 10 tonne water tank and a water system that creates a downpour from above and flooding from below the stage, ‘raining’ (and recycling) over 12,000 litres of downpour per performance!

The stage production of Singin’ in The Rain is based on the classic Metro-Goldwyn-Mayer film. This production is by special arrangement with Warner Bros. Theatre Ventures, Inc. Music Published by EMI.