Celebrate the sensational toe-tapping sound of Glenn Miller with Bugle Boy at the Grove Theatre on Monday 23 June at 7.30pm. 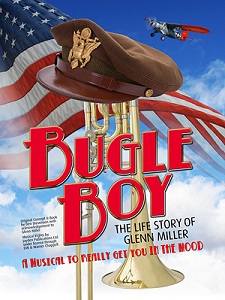 Critically acclaimed hit musical Bugle Boy explores the life, loves and work of Glenn Miller – the legendary band leader. Miller’s passion for music began at the young age of eleven when he saved enough money from milking cows to buy his first trombone. By the time he graduated high school in 1921, Miller had set his heart on becoming a professional musician. He went on to play in a host of bands and searched tirelessly for a unique sound for over 20 years until, at last, he found it. Years later, Miller would become the best-selling recording artist from 1939-1943 enjoying success for only three short years until his disappearance. This iconic musician’s name has become synonymous with big band music ever since.

UK playwright Den Stevenson set about making a musical about the great band leader when he was a booker for Glenn’s brother’s band, The Herb Miller Orchestra. He honed his unique concept on English soil; then polished and fine-tuned the show on the other side of the ‘Pond’ firstly in Virginia and then on Broadway. Now, the finished product is taking to the stage once again.
Bugle Boy is both a celebration of the unmistakeable sound of Glenn Miller and a love story – a story of one man’s sheer determination to find an original sound and a quest that became his Holy Grail. The production takes you from the early years of Miller’s life as a teenager to leaving college, until his mysterious disappearance in 1944, with Glenn Miller’s own world-famous music weaving its way through an emotional and inspiring storyline.

The show features all of Glenn Miller’s famous and instantly recognisable tunes from Little Brown Jug to String of Pearls, Moonlight Serenade to Pensylvania 6-5000 and Chattanooga Choo Choo to Kalamazoo, this fantastical musical will once again put you…In The Mood.

Bugle Boy is at The Grove Theatre, Dunstable on Monday 23 June