Note: In addition to theatres across the region, all three plays will  be performed on various actual battlefields sites. Judi Herman has visited one of them, Monken Hadley Common. To hear her audio report, please go to the foot of this posting or click on “Judi Herman Interviews” above. 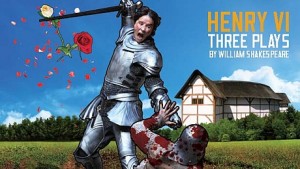 The Globe Theatre come to the Home Counties as one of the stops on their current National Tour. They have chosen to present the three plays which make up Shakespeare’s Henry VI. They create a world without ideology; a savage time, when the heroes are not kings, but formidable women, such as Joan of Arc, or rebels, such as Jack Cade.

Shakespeare almost certainly did not set out to write a trilogy. Each play can be enjoyed without knowledge of the others.

Harry the Sixth Following the death of Henry V, celebrated for having united England and subjugated France, divisions appear at the highest levels – first between those around the infant Henry VI, later between the two great factions in English politics: the houses of Lancaster and York. Only the young Lord Talbot, locked in combat with the bewitching and enigmatic Joan of Arc, seems capable of redeeming a divided and dishonoured kingdom.

The saintly Henry VI is undermined by his nobles, especially the ambition Richard, Duke of York, and by the Kentish rebellion, led by the charismatic Jack Cade, popular champion and savage critic of England’s social inequality.

Henry VI: The True Tragedy of the Duke of York

The True Tragedy of the Duke of York A bloody power struggle opens up between the King’s party, led by the fearsome Queen Margaret, and the Yorkists, led by first Richard, then his sons Edward and ‘that lump of foul deformity’, Richard of Gloucester.

Henry V1 – Three Plays By William Shakespeare came to Monken Hadley Common – the site of the Battle of Barnet – on Saturday 24th August – and you can still catch them at Shakespeare’s Globe, the Oxford Playhouse and the Cambridge Arts Theatre during  September (see dates below).

The three plays were performed all in one day, not just in home counties theatres, but also on the two Wars of the Roses battlefield sites in Hertfordshire, at St Albans and Barnet. Judi Herman has seen the three plays and was lucky enough to have Frank Baldwin, Chair of the Battlefield Trust (which is based in St Albans) and a professional Battlefield Guide, as her personal guide, when she visited Monken Hadley Common, the site of the battle fought at Barnet back in 1471 – a win for Yorkist King Edward the Fourth. And this is where all three plays were performed recently. Join them on the battlefield by clicking on this link!

You’ll find this interview and lots more information if you click on “Judi Herman Interviews” on the heading of this page.

Henry V1 – Three Plays By William Shakespeare can still be seen at the following venues: