OH MY GOD YOU GUYS! LEGALLY BLONDE IS at MILTON KEYNES 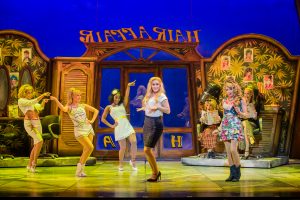 Legally Blonde The Musical is an all singing, all dancing romantic comedy, a fun-filled, feel-good pink fest. College sweetheart and homecoming queen Elle Woods, doesn’t take no for an answer. When her boyfriend dumps her for someone more serious, Elle puts down the credit card, hits the books and heads for Harvard Law School. Along the way, Elle proves that being true to yourself never goes out of style.

Legally Blonde The Musical has music and lyrics by Laurence O’Keefe and Nell Benjamin, book by Heather Hach, and is based on the novel by Amanda Brown and the MGM motion picture. 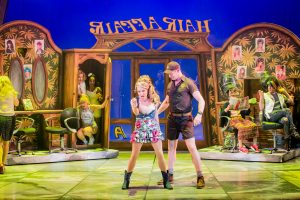 Rita Simons (Paulette Bonafonte) is best known for playing Roxy Mitchell in BBC’s EastEnders for which she has won numerous awards and is one of Britain’s best loved actresses. Rita has also appeared on TV in Mile High as Hannah, Dream Team as Julie and London’s Burning. In Spring 2012, Rita was the subject of a major documentary film Rita Simons: My Daughter, Deafness and Me made by Leopard Films for BBC1. Rita actively supports the charity RNID. 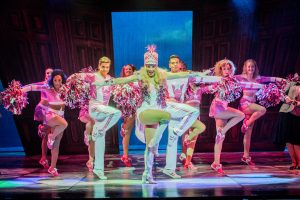 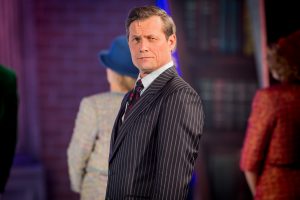 Bill Ward (Professor Callahan) is best known for his work on two of the country’s leading soaps. He has just finished 3 years playing farmer James Barton in Emmerdale. Previously, he played the builder Charlie Stubbs in Coronation Street. In addition to his many and varied TV and film credits Bill is no stranger to the stage and has worked on everything from Sophocles to The Spice Girls at Bristol Old Vic, Manchester Royal Exchange, Northern Stage, Clwyd Theatr Cymru, and The National Theatre Studio amongst others. He’s played Prospero in The Tempest in Guildford, Lancelot in Spamalot in the West End, and Kevin the Gnome in a muddy field in Glastonbury.

Legally Blonde is at Milton Keynes Theatre until 2nd June

I was lucky enough to be at the press night of Legally Blonde at Milton Keyne – and what a night! This show has toured before, but this production beats the previous incarnations hands down! It has pace, lots of new ideas and its lots of fun! They have subtly brought it slightly up to date in place – but not so’s you’d notice. Lots of great new production ideas (involving bicycles etc.) and I thought the classroom at Harvard and the courtroom scenes worked better than ever without being too cluttered with tables and chairs. All in all, this is a great night out, the audience stood as one and applauded for a good ten minutes – don’t miss it!

Legally Blonde is at Milton Keynes Theatre until 2nd June